When people claim that the lottery is a crapshoot they are not just talking about the Powerball, but the NBA Draft. Every year, promising NBA prospects are evaluated, tested and sometimes traded for, like we just witnessed with the 76ers moving up in the draft to (pretty much officially) draft Markelle Fultz.

Now, the #1 pick has historically been pretty successful, apart from an Anthony Bennett or an Andrea Bargnani every now and then, but the lottery as a whole — picks #1-14 — has normally been “a crapshoot” except for one common thread, there are usually 4 clear “busts” and conversely 4 clear “booms” in every draft lottery.

On Wednesday, I will detail my predictions for which 8 players will boom or bust in this years draft lottery, but for now, I’ll talk about the historical busts or booms in the last 10 drafts to further prove my point, starting with the 2007 NBA Draft:

Right off the bat you can see the biggest bust and boom examples of the last 10 NBA Drafts. Greg Oden barely reached 100 games before his NBA career was over. Mostly due to injuries, Oden’s career never took off even though he was billed as the best prospect since LeBron and the best big man since Shaq.

#2 on the other hand, is one of the biggest booms ever, Kevin Durant. His abilities are unquestionable and he has a chance of earning a legit championship at some point. Mike Conley, Al Horford and Joakim Noah have all made a mark on the NBA also. Noah might not look too good now, but he is only 3 years past winning defensive player of the year. Mike Conley has somehow never gone to the all-star game, but he is likely the best player ever who hasn’t and is currently the guy with the most expensive contract in the league and he deserves every penny of it.

Yi Jianlian is a known NBA bust, who somehow was a late cut for this past season. I’ll gladly admit I don’t even know who Acie Law and Julian Wright are, probably because they are both American busts who are a dime a dozen. At least Al Thornton I had somewhat heard of, as one of the main scorers for a then lowly Clippers team in 08/09.

Man… Imagine if it wasn’t for LeBron, the Bulls team of Rose, Noah, Luol Deng and an emerging Jimmy Butler would have been remembered a lot more fondly. I’ll give Derrick Rose a pass because of the horrific ACL tear he got against the 76ers, which likely makes him the first league MVP who doesn’t get into the Hall of Fame. It’s hard to imagine, but the inefficiently chucking Derrick Rose of 2017 was supposed to be a dominant hyper-athletic guard right about now, much like the soon to be MVP Russell Westbrook.

Speaking of Westbrook… he is also in this draft and he sure as hell is a boom pick. As is his former UCLA teammate Kevin Love. This was the last draft the Timberwolves had Kevin McHale be in charge of the picks and he did a good job by trading down from a bust at #3, OJ Mayo, for a boom at #5, Kevin Love. This was his final draft before David Kahn took over… More on that later…

Screw it… let the Kahn bashing begin already, because the Miami Heat drafted a bust at #2, Michael Beasley. Why does this have anything to do with David Kahn’s incompetence? The Timberwolves, under Kahn’s regime took Beasley off the Heat’s hands, so they had enough cap room to sign the big 3 of LeBron James, Chris Bosh and Dwyane Wade, the first of 2 dynasties Kahn “helped” create.

Oh.. and he later traded for Anthony Randolph as well, the last bust of the bunch. Kahn had a thing for draft busts… 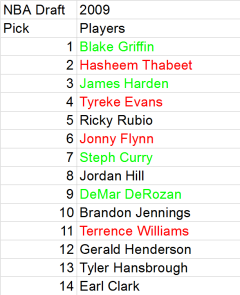 David Kahn drafted Jonny Flynn… I don’t blame you if you don’t know who Jonny Flynn is, but he was basically a fast PG who was out of the league even faster. A verified bust. He was picked 1 spot ahead of a little guy called Steph Curry.

Similarly dumbfounding was drafting Hasheem Thabeet when Steph Curry and James Harden were available. Thabeet never developed a game, at all, he was just… tall. Harden, as much as I rag on him for being ugly to watch, is a top 10 player in this league, and has a good shot of finally being MVP next season. 3rd time is the charm I guess, for the former #3 pick and NBA draft boom.

With Curry, Harden and Blake Griffin in the same draft, it’s a small wonder that Tyreke Evans somehow was the rookie of the year. Granted, Blake was out the whole season and won ROTY the year after, but Tyreke Evans legitimately got comparisons to LeBron James after his rookie year. Now he was a throw away in the DeMarcus Cousins trade earlier this season. Speaking of DeMarcus Cousins… and once again, David Kahn…

David Kahn drafted Wesley Johnson over DeMarcus Cousins… Admittedly, he had concerns over Cousins’ attitude, which are still concerning today, but somehow I don’t think Wesley Johnson would have netted Buddy Hield and a lottery pick if you traded him today.

Even more hilariously sad for the Timberwolves, Kahn actually considered drafting Paul George at #4 who is an even bigger boom than “Boogie” Cousins, but Kahn ultimately decided against it. He also decided against trading Jonny Flynn for the 10th pick, where Paul George ended up getting picked… KAAAAAAAAAAAHN!

John Wall was a no-brainer at #1 and Gordon Hayward has turned into one of the best wings in the league. This was a pretty strong draft, but both Xavier Henry and Ekpe Udoh have had short-lived NBA careers, even though the latter has been impressive in Europe lately and might return to get rid of his bust status. He will always be a bust pick for the Golden State Warriors however and they are still paying the price for… uhm… they seem to be doing alright.

Drafting Klay Thompson is certainly a reason why the Warriors made it out of the drafts around the start of this decade just fine. 2 years after getting their franchise player in Curry, the second splash brother was drafted at #11. An obvious boom. The Kings are probably still kicking themselves for going with “Jimmermania” instead. But hey, when you have a chance to draft a guy with a cool name like Jimmer, you gotta do it.

Speaking of cool, the coolest player to watch in the league — Kemba Walker — was picked at #9 and belongs in the boom category. There was what seemed like an endless influx of great young PGs around this time and the #1 pick in the 2011 draft was no exception either, Kyrie Irving.

As for the last “boom” pick, Tristan Thompson might not be the flashiest name, but another guy dropped out of the lottery down to #15, Kawhi Leonard. So blame Utah, Phoenix and Houston for not giving us the usual 4th obvious boom candidate.

Derrick Williams and Jan Veselý however, are known NBA busts and never lived up to the hype. D-Will, the Caged Lion, was actually a candidate for the 1st pick, but getting picked by David freakin Kahn at #2 to be played as Kevin Love’s backup in Minnesota wasn’t exactly the best career move for Williams.

The rest of the list has turned out to be decent contributors in the NBA, so I had to go with Bismack Biyombo for my last bust in the end. I mean, he had a good season with the Raptors, but he never amounted to much for the team that drafted him in Charlotte and he is currently being paid $17 million a year for the next 3 seasons as a big without too much mobility and shooting, which is basically a death sentence in today’s league.